Afflator breathes upon the conditions of today’s robotic creatures that are pulled into the muck of mimesis. To have a robot that is spoken to in natural language, that walks in a bipedal fashion, is the research that is valorised. Afflator deforms these conditions to suggest that the robotic form does not need to resemble anything we have seen before, that the means of engagement with a robot can be something other than traditional language and movement. Draping from the gallery ceiling and extending along the floor in a wave of fabric, afflator unfolds onto contemporary robotics research to suggest other ethico-political options for engagement with the robotic other. Extending from afflator is a tube with an attached mask, worn by the gallery visitor to create a machinic assemblage of human and creature. Sounds from the visitor’s mouth stimulate afflator’s activity; afflator’s activity stimulate sounds from the visitor’s mouth. Engaged in the ecstasy of communication, human and afflator in an assemblage work to deflate the present bubble of functional robotic design. 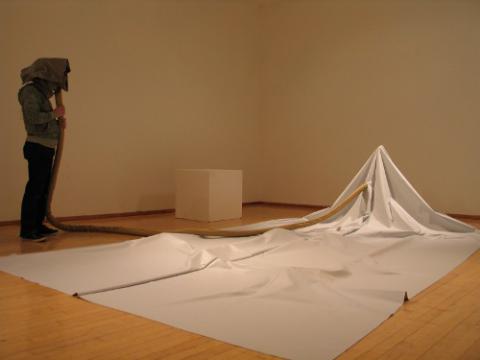